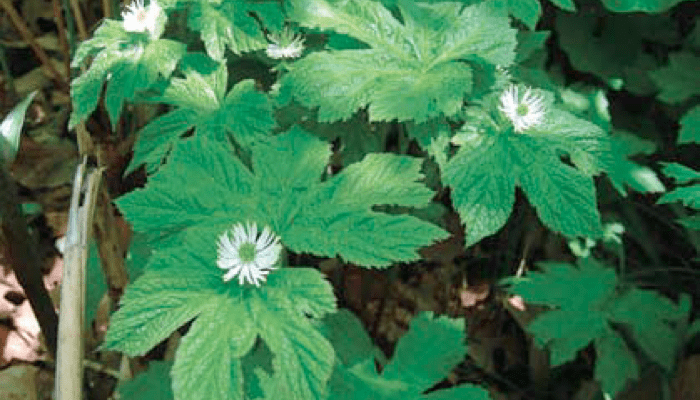 The chill of October sends energy downwards. Plants draw their juicy potential from leaves and flowering tips and direct it into their roots as they prepare to survive the long winter. It is for this reason that autumn is the traditional root harvest season; roots are at their most potent, fully charged from a spring and summer of photosynthesis.

The use of roots as medicine is highly valued in American Appalachian herbalism (goldenseal, black cohosh, ginseng, stone root, etc… ) Partly due to concentration of active constituents, the romance of the root can also be attributed to the unfortunate influence of commerce. Commerce places a higher value on that which can be stored and sold when it suits the market and roots tend to last longer sitting in a burlap bag or on a shelf than a flower or leaf.

Goldenseal (Hydrastis canadensis) is one of our most famous herbal residents in Appalachia. Its beautiful yellow root is traded around the world. The yellow color signifies it contains berberine, which is a bitter alkaloid that acts as a powerful anti-microbial. Goldenseal has been shown to be extremely effective against many feared pathogens, such as e.coli and staphylococcus, both in practice and in laboratory testing. Goldenseal is also a mucus membrane tonic, meaning it improves both the structure and function of mucosal tissue, such as your gut lining, nasal passages and skin. This is an invaluable double action –both fending off unwanted microbial overgrowth, and making the terrain of your body stronger and more resistant to a micro-floral imbalance in the first place.

With all of these wonderful benefits, it is no wonder the root is extremely popular, Unfortunately, this popularity had its price. When the root is harvested, the life of the plant is sacrificed. Goldenseal was so overharvested that wild populations dwindled and most herbalists began to call for discontinuing its use. Luckily, many farmers have begun growing it and each day more and more of the goldenseal available on the market comes from a cultivated, and therefore, sustainable source.

Another way to reduce pressure on goldenseal populations is to encourage the use of the leaf, an often discarded portion. Instead of ignoring the leaf in the desire for the root, we can gather it for medicine without disturbing the root, or use it in combination with the root. I was first trained to use the leaf by my former teacher, Michael Moore, and have observed positive results in my practice. Recent clinical research also suggests that the combination of leaf and root is even more powerful than the root alone! This is due to synergistic effects between the leaf, which is higher in flavanoids, and the root with higher concentrations of berberine. This means less root is needed for equal effect!

As residents of the magical Southern Appalachians we are both benefactor and guardian of many herbal treasures. Let’s work to promote the preservation of goldenseal so we can enjoy her company for many years to come.

**Sevananda carries the leaf and root in the bulk herb section.