Chronicles of an urban wildcrafter

Never ingest anything you have not positively identified.

For practice with proper plant identification, go on a guided plant ramble or use a reliable field guide such as, Identifying and Harvesting Edible and Medicinal Plants by “Wildman” Steve Brill, or Newcomb’s Wildflower Guide.  Please harvest responsibly and review this Wildcrafting Checklist by Howie Brounstein who reminds us, “Wildcrafting is stewardship.”

Food Map for Foraging in ATL created by Concrete Jungle

This google map is an ongoing project that strives to document food sources in the Atlanta metro area.  Specifically it identifies fruit and nut trees that are on public land to increase the publics food security. 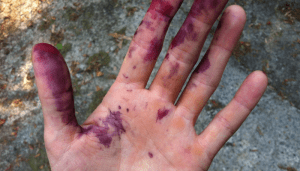 Click here to read Christina Boyes’ article on city foraging safety as researched by a team from Wellesley College and presented at the Geological Society of America.

“The way that different plants absorb contaminants is still being studied, but roots and tubers usually have the highest lead and arsenic concentrations, followed by leafy greens like spinach and mustard. Fruits and seeds, on the other hand, are literally at the other end of the plant and tend to have the lowest likelihood of contamination,” said Ciaran Gallagher, a member of the team who is majoring in Environmental Chemistry.

Here is a link to the results of a recent study done by researchers in San Francisco entitled, “Weeds growing in poor city areas more nutritious than store-bought produce” that not only described the immense nutritive value of eating the weeds, but also attests to their safety, “After rinsing in water, the plants had no detectable levels of pesticides, polychlorinated biphenyls (PCBs) or heavy metals – all toxic substances that might have been expected in local environments.”

Check out this interview with Ava Chin who has a few recommendations for urban foraging, such as foraging in elevated areas away from buildings and roads, or if you tend to work a particular area for an extended period of time, consider some soil testing.