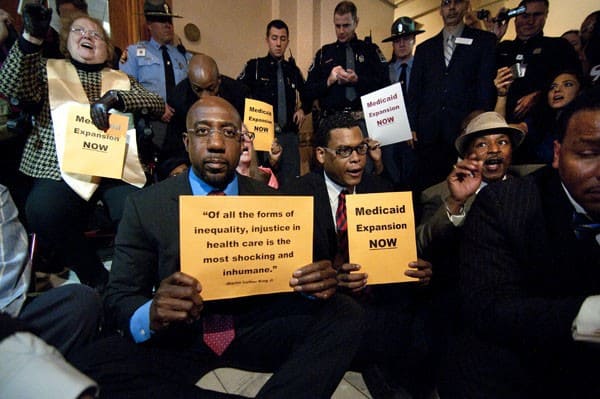 It has been 50 years since the Poor People’s Campaign. Reading these historic demands we might realize that after 5 decades we could simply copy, paste, and resubmit them to the government. Our demands haven’t changed in these 50 years because the situation hasn’t– we still live in a country of great health disparity.

Herbalista believes health care is a human right. And since our government has failed to secure that right for the people, we will begin the work ourselves, serving the people, the land, and creating the world we seek.

(Poor People’s Campaign Statement of Demands for Rights of the Poor presented to the US Government, 1968)

The photo above was taken at a protest at the Georgia State Capital when the people demanded our state not strike down the Medicaid Expansion of Obamacare (aka the Affordable Care Act.) It shows the Rev. Raphael Warnock, a pastor at Ebenezer Baptist Church where MLK used to preach. The quote he holds was made by Dr. King when addressing the 2nd Medical Committee for Human Rights in 1966.